Stations of the Cross

Here is Maud in her own words describing the Stations of the Cross, “My idea was to get away from the usual machine-made plagues in which Roman soldiers with whips and ropes dominate. My intention was to turn the focus on to Christ, rather in the idiom of the modern cinema. I wanted to show it as his saga, with the condemnation, journey and death of the hero giving the spectator the impression that they are following him on the road to Calvary, rather than standing in a church looking at pictures all of the same size and same emotional content.” 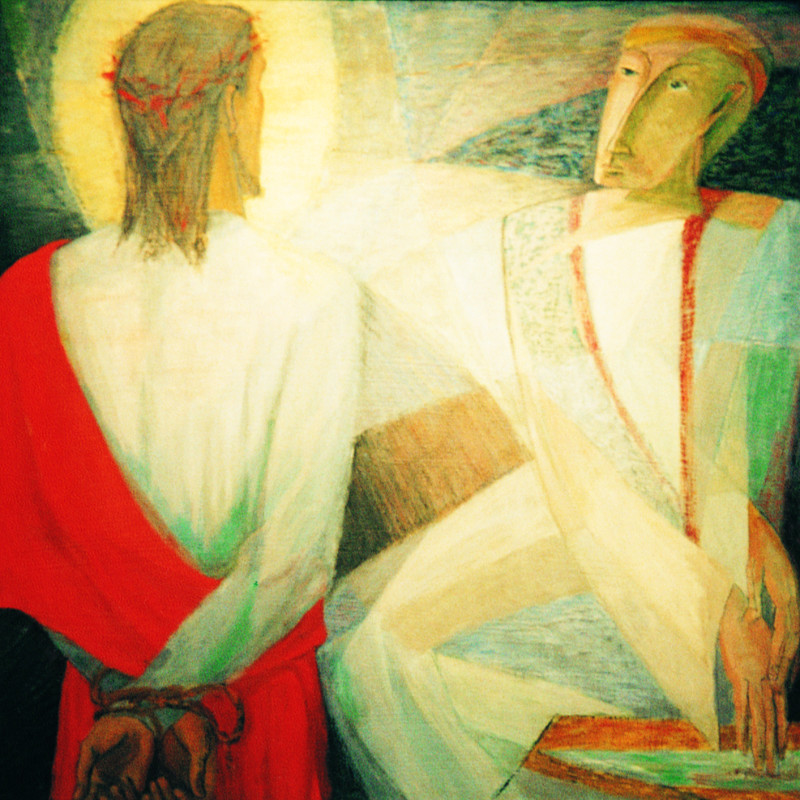 Jesus is condemned to death

“Pilate sits on his throne, vacillating. Christ stands erect in calm majesty; it is really he who is the judge. Contrast his crown of thorns with Pilate’s golden diadem – a bit askew. Note the scourging marks faintly showing through the white robe. His other garment[or tunic] is royal red (Art thou a king?’).
One side of Pilate’s face shows interest. Not devoid of cunning; the other side shows fear. Eyes riveted on our Lord, he turns his body away and washes his hands.” 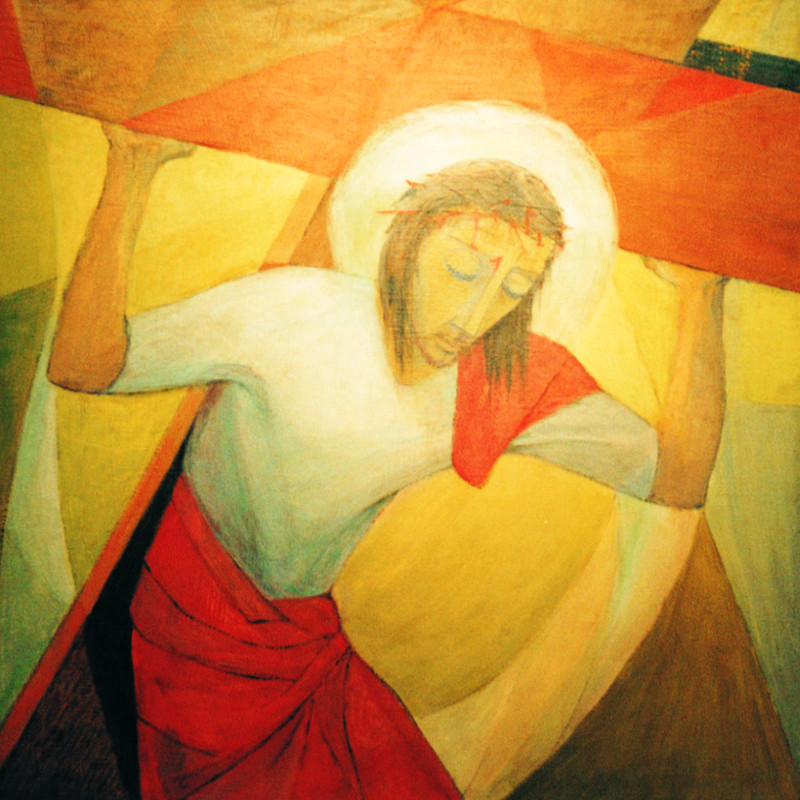 Jesus is made to carry his cross

“Of his own free will, Christ takes up the cross in a golden glory. This is the moment he had lived for: ‘How am I straitened until it be accomplished … for this cause came I into this world.’ He is a carpenter, and knows how to handle wood. The lines of the composition lift as he lifts the cross.” 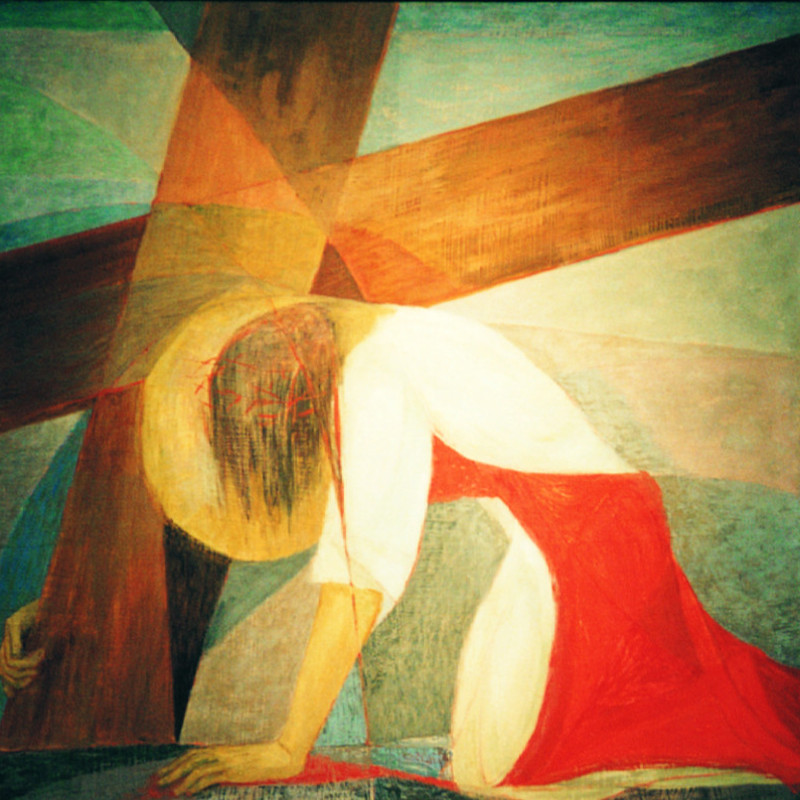 Jesus falls for the first time

“He has moved away, and so looks smaller. He falls (the lines descend). He is alone and weary, but clings to the cross and to his purpose.” 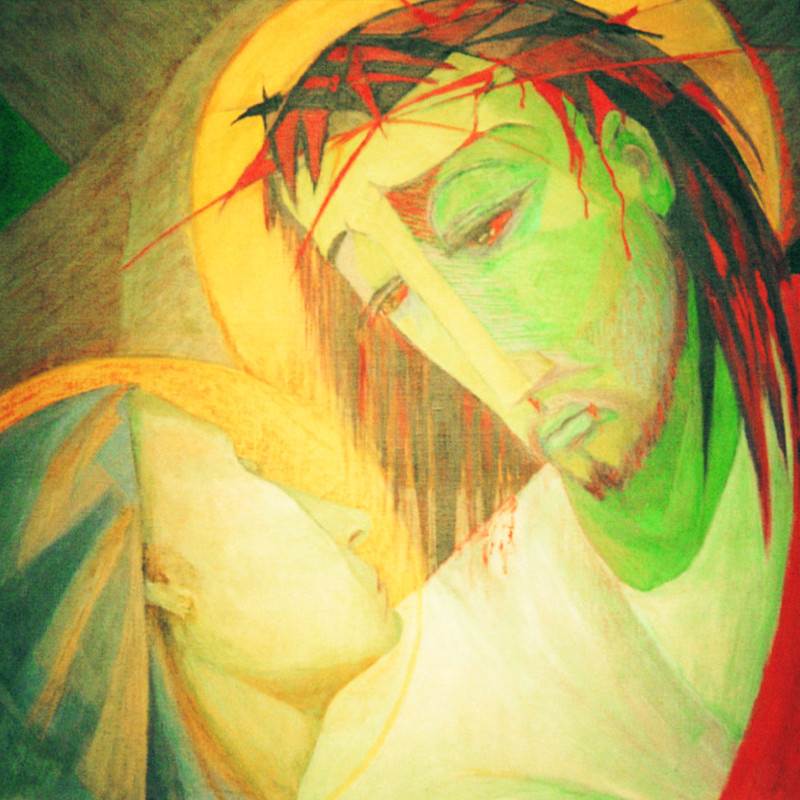 “In a greenish unearthly light in which their two halos glow with the fire of their love, they come near each other. The strangeness of the colouring gives the added poignancy of the situation. Mental suffering (the grief he is causing her) adds itself to his physical pain. He looks at her. This is the only time we can see his eyes, tired and bloodshot.
I have tried to show Our Lady without glamour or sentimentality. Only the angle of her face shows the depth of her anguish.” 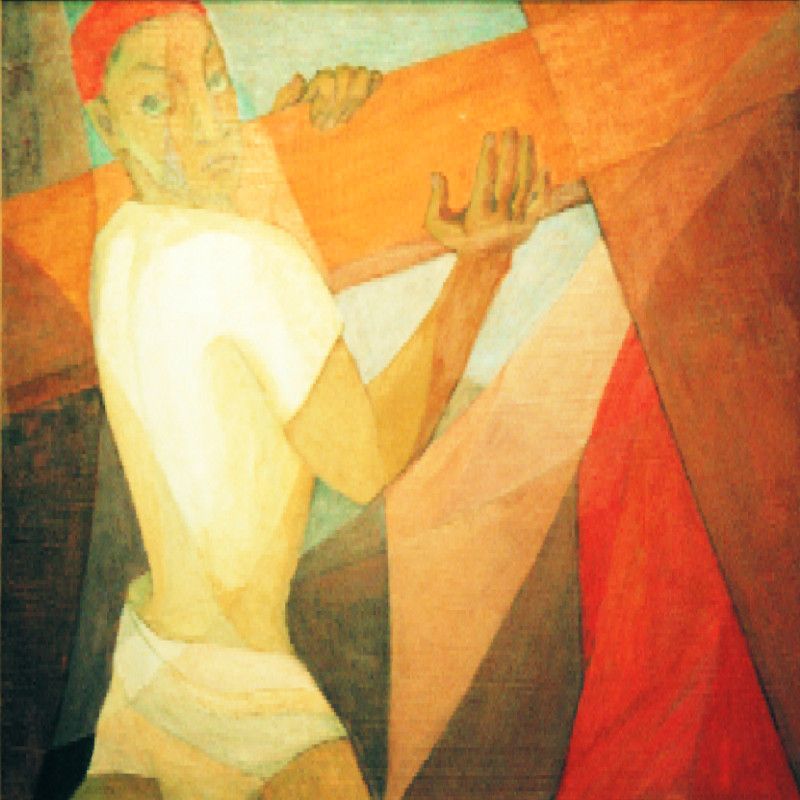 Simon of Cyrene is made to carry the cross

“Simon of Cyrene, from North Africa – representing all Africans, and us all – helps to carry the cross. The lines appear upwards and the colour is lighter when he takes some of the weight.
On the face is annoyance at being pushed into this, some fear, and the beginning of sympathy.” 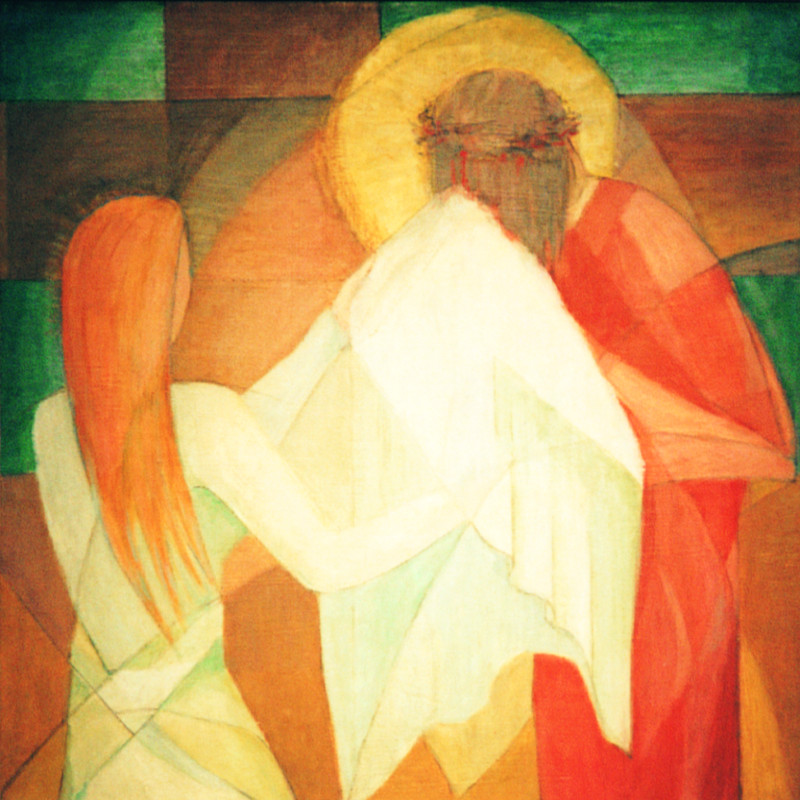 Veronica wipes the face of Jesus

“Veronica, a young woman, runs up from behind; with a spontaneous gesture she offers him all that she has with her – a veil from her head – to wipe his face. He turns and accepts her offer. The cross is stationary for a moment’s pause.” 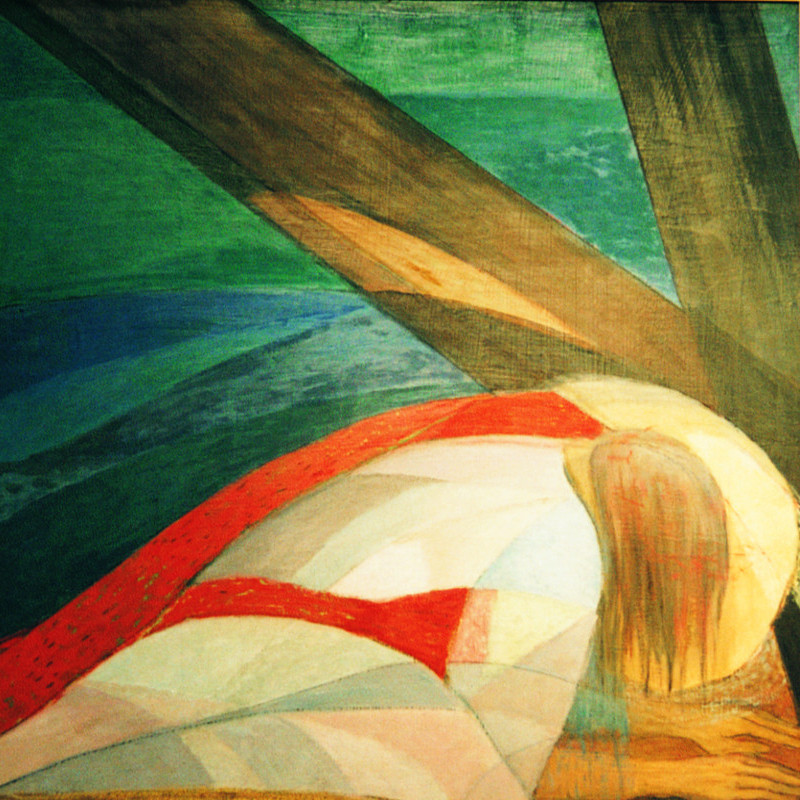 Jesus falls for the second time

“In the second fall he loses his grip in weakness, and both hands are on the ground. The unwieldy cross tips forward. (Note the change in the weight of its angles – cf. Einstein on the ‘weight of angles’). Darkness increases and desolation.” 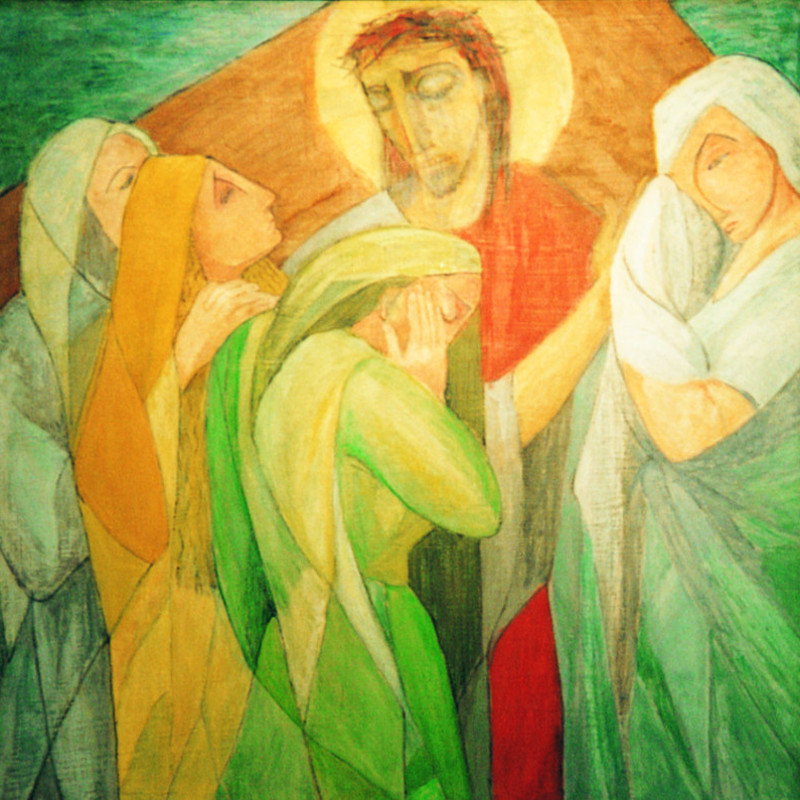 Jesus consoles the women of Jerusalem

“The women, dressed in their Passover pretty clothes, unexpectedly fall into the crucifixion procession. They gather round him, weeping. Their compassion for him, and his for them, is depicted.” 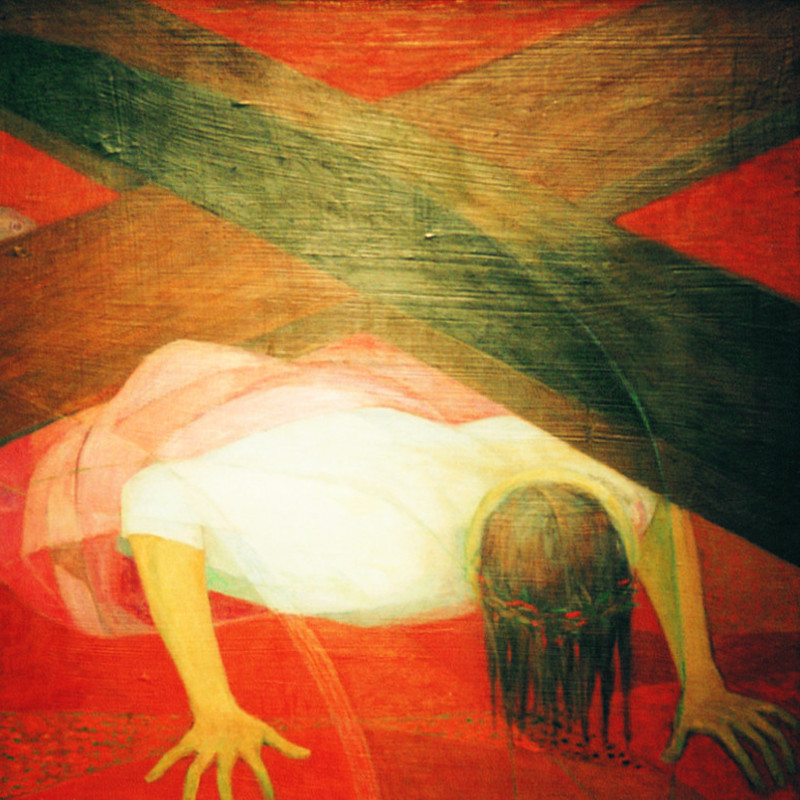 Jesus falls for the third time

“The cross has increased in weight. He is right down and almost crushed under it. All the earth looks red to his blood-filled eyes. His halo is diminished to almost nothing, and finishes in the crown of thorns. Note the two contrary directions of the stress – the falling of the cross and his effort to rise. I have not painted him ‘all out’; he is still straining to get up and carry on, by the power of his will.”

Jesus is stripped of his garments

“They have now arrived at Calvary. Cruel hands grad and tear off his garments, showing the marks of the scourging. At this moment, when his clothes are being dragged from him, his halo glows with a strange new colour – a suffering colour – but with the sign of divinity.” 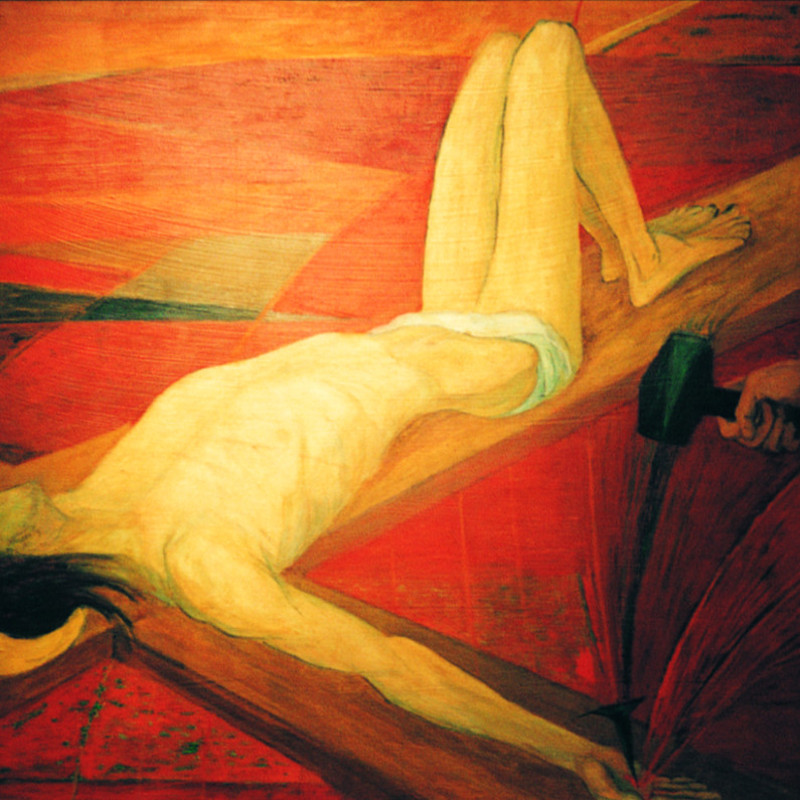 “All the lines converge on the centre of the horror – the great iron nail immobilising the hand that came to bless and heal. Zig-zag lines up and down suggest the shattering vibration of the blows. The cross lies across the whole earth – across the whole globe. The knees are drawn up, showing the feet for the first and the only time in the series. The back is involuntarily arched in tenderness, and the head turned away, not showing the face. We have already seen too much.” 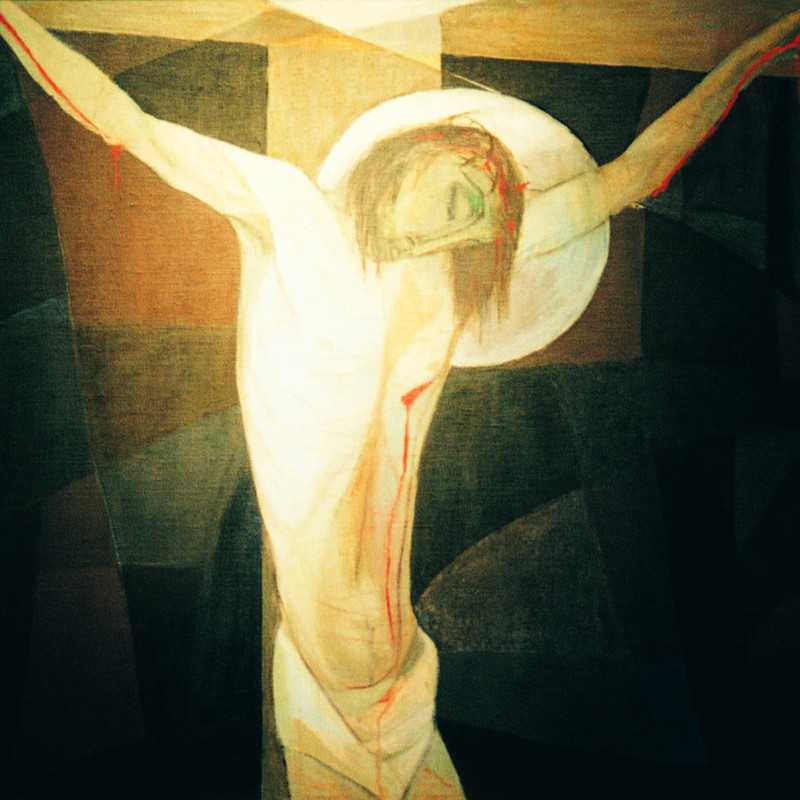 “The climax is now reached in darkness. The lines of composition drag downwards to express the weight of the dead body which is shown in a dew-coloured sweat. The head droops and the face is partly covered by the clammy hair. The body is almost hollowed out – ‘he emptied himself’ – and the halo gleams white like a waning moon. The task is accomplished.” 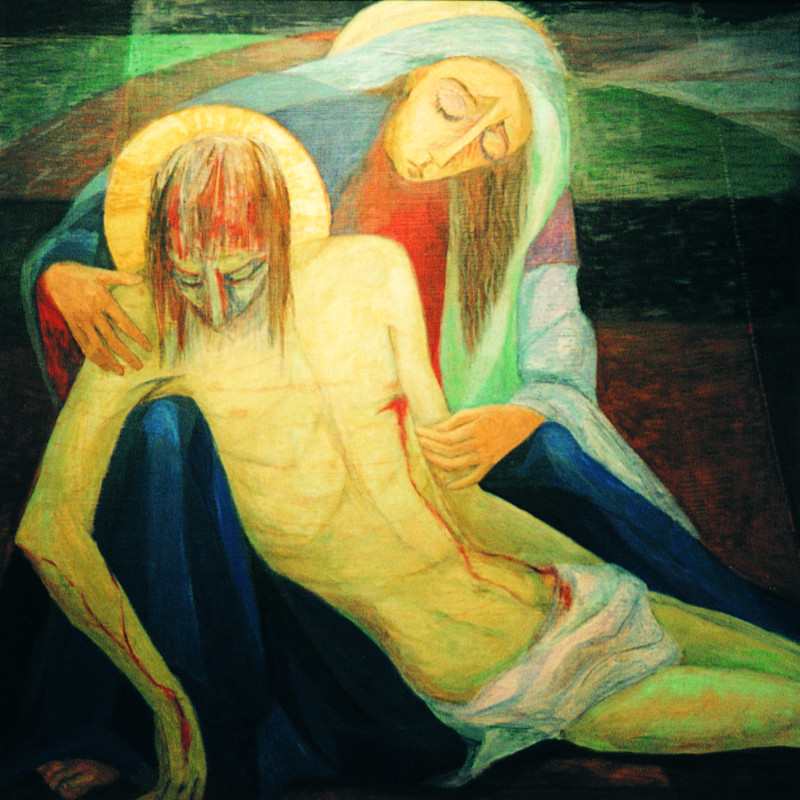 Jesus is taken down from the Cross

“Our Lady sits on the ground and takes the dead body back to herself, between her knees – the position Visionary and Stigmatist Theresa Neumann told me she saw in a vision. She handles it with tenderness, hardly daring to touch the body that has been hurt so much.

The composition lines are wide and circular, to suggest the maternal gestures of enfolding. The grief and pity on her face are combined with her conformity to the will of God. The darkness is a little dispelled. Her child’s suffering is over.” 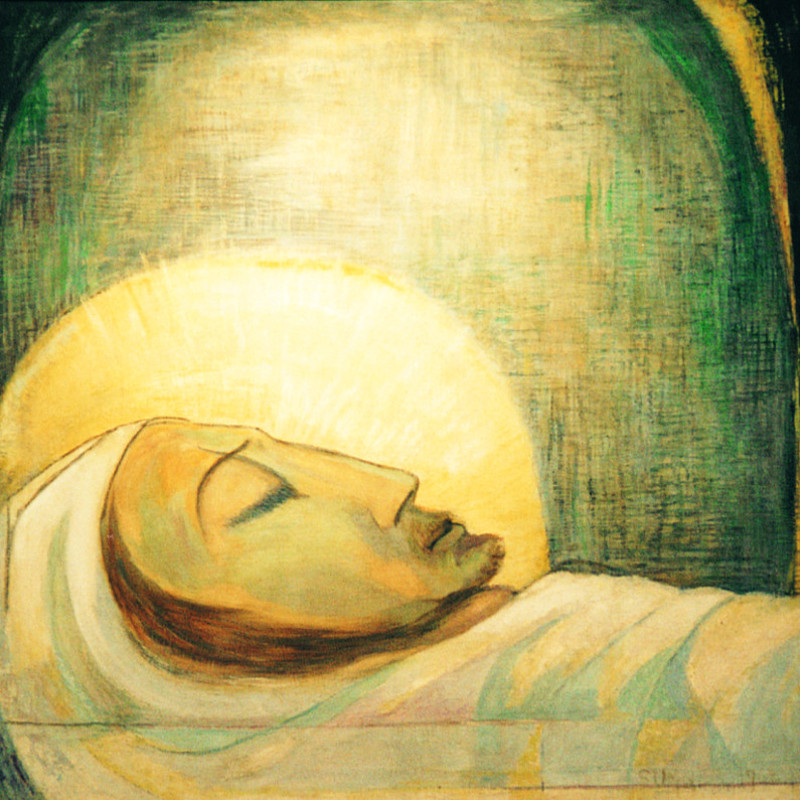 Jesus is laid in the Sepulchre

“The silence of the tomb (a close-up; the spectator come quite near), Christ lies at peace, in winding sheets and majesty. The halo, like the rising sun, suggests the Resurrection. There is an increase of soft light all over the picture, and especially at the top of the oval vault. There is a quiet feeling of triumph, of a work completed. One still feels the domination of his will – of his spirit – of his Godhead.

‘I have finished the work which thou gavest me to do. And now glorify me, O Father, with thyself.’”